Carol's skills in recreating 19th-century clothing and textile items have added to their interpretive collection each year. 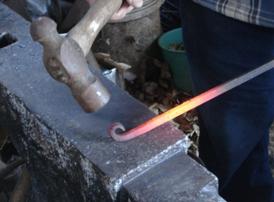 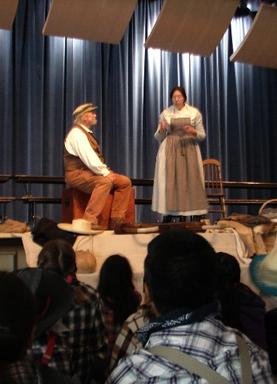 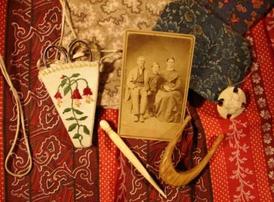 Bruce's expertise in blacksmithing has enabled him to add period iron work to the wagon and exhibit items.

Bruce Horttor & Carol Verbeeck
have been participating in and organizing living history programs throughout California and Nevada since 1986. Together, they bring an exciting combination of real-life homesteading skills and  historic research to schools and events.

An avid outdoorsman, Bruce has years of experience traveling the trails of the Sierra Nevada mountains with horses and pack mules. Using his skills in blacksmithing and woodworking, he has restored and replicated several 19th-century tools and horse-drawn vehicles. His research and workmanship have resulted in the construction of the covered wagon box, ox yokes, and numerous other items now part of the traveling exhibit.

Since 1980, Carol has developed, written, and illustrated educational materials for major publishing companies, and has taught for several agencies and special programs in the San Francisco Bay area. She has also produced exhibits and programs for Donner and Marshall Gold Discovery State Historic Parks and the Wilber May Museum in Reno, Nevada.